When I was younger, my parents would always tell me to eat vegetables and fruits, looking back they were right.

Studies have shown that people who eat 5 or more servings had 20% less chance of suffering hearth disease and stroke. 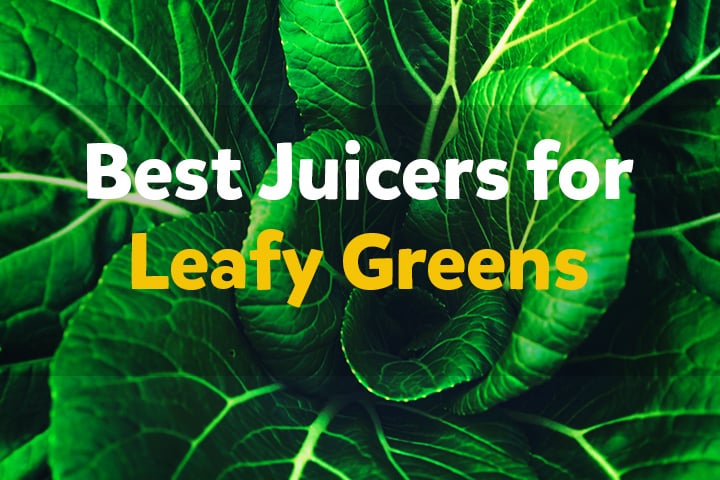 For me, I only realized the importance of this when I had high cholesterol. And I’ve started juicing to supplement the solid food I eat.

To get the most out of juicing, you HAVE TO include green leafy vegetables because these are the most nutrient dense foods we have.

In this article I’ll feature 5 of the best juicers for leafy greens. These machines will extract the most from one of the most nutrient foods out there – leafy greens.

If your recipe involves lots of leafy greens then these extractors will do an excellent job.

How to choose one?

The rule of thumb is if you juice lots of leafy vegetables like celery or spinach, the no-brainer option is a horizontal auger juicer..

This means that the auger has to sit horizontally across the motor like this. 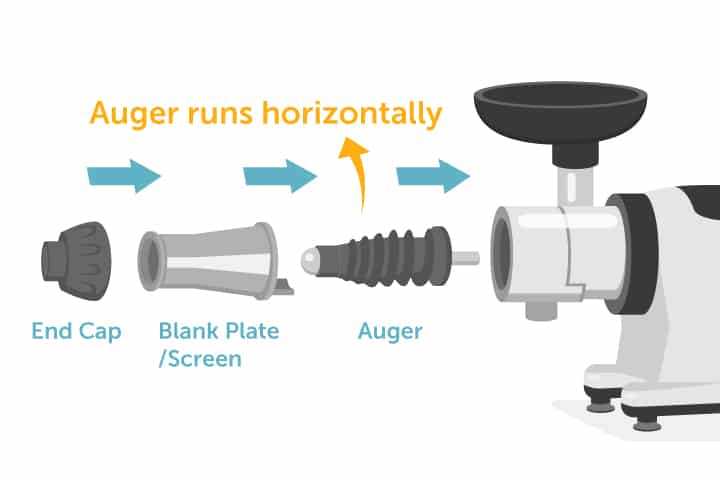 This design works best for leafy veggies because it has a narrow screen. The more narrow the screen, the more juice it will extract.

Another important feature would be the pulp ejection port where all the pulp comes out. The ejection port in a horizontal juicer does not have any choke points.

Put this side by side against a horizontal juicer and you know what I mean.

Another key feature that will allow you to extract more is an adjustable end cap.

This feature puts more backpressure on the pulp. And will allow the juicer to be more efficient, as much as 12% to 15% more based on reviews.

If you want to juice wheatgrass then a horizontal single auger juicer would be better option choice because it will not foam as much as a twin gear and it’ll extract more even with less.

Take note that these juicers won’t be as self-feeding as a vertical auger style juicer like an Omega VRT or Kuvings Whole Slow juicer.

What I mean by that is you’ll need to exert some effort to push produce through the feed chute.

These also have a small feed chute.

Four of the five have a 1.5″ diameter feed chute, the NC800 has the largest one. So if you’ll include stuff like apple or lemon into your juice, you’ll need to do some chopping but not too much.

Avoid any of these products if you have a condition like arthritis because it takes some effort to push ingredients down the chute. A better option would be any of the two juicers above.

The biggest reason is the adjustable end cap with 5 settings that will allow the user to adjust how much backpressure to put on the pulp.

The screen area and auger are larger which means more yield but at the expense of a longer cleaning time.

You’ll need space to store this

This is the juicer to buy if you have a large counter space, don’t mind investing in a quality product like this and willing to spend a little time learning playing with the settings of the adjustable cap.

The adjustable end cap also has a learning curve so if you want a set and forget type juicer, I’d suggest going for the older 8008 or 8006.

What are the downsides?

This juicer is expensive at close to $265. But compared to a top of the line twin gear juicer it is still relatively cheap and the yield won’t differ that much.

If you want to get the most out of your green leafy vegetables, this hands down beats most juicers out there in terms of price and feature.

Bottom line: The Omega NC800 brings the best of both worlds – a large feed chute and efficienty to sqeeuze out a lot of juice from leafy greens. And this being an Omega product, you’ll get a pretty length warranty of 15 years. If you purchase this from Amazon you can purchases an extended warranty of up to 4 years as well. 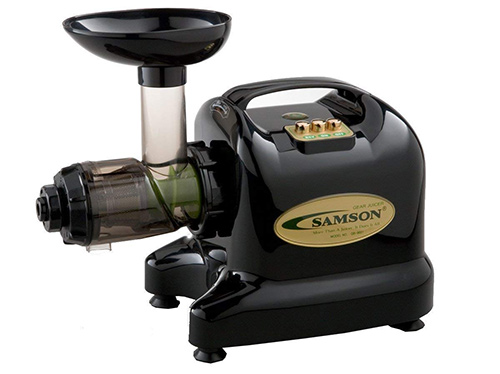 Samson juicers aren’t as popular as more mainstream brands such as Omega, Breville and Jack Lalanne but if you want the most out of every ounce of leafy green have a long look at the Samson 9005.

Like the Omega NC800, this Samson juicer works great on wheatgrass. And almost all leafy greens because it has a large screen area.

It also has an adjustable end cap which allows it to extract more than the bestselling 8006.

If you look closely at its auger, it has a stainless steel insert at the end that prevents plastic shavings from falling into the juice. It also has a blank plate attachment that can extrude pasta and make sorbets, nut butters and salsa.

It uses a 160 watt motor that has 1/3 hp of squeezing power, if the NC800 is too expensive for you then this is a next best option because it costs just under $260. And comes with a long 15 year warranty on all the parts of the juicer.

What are the downsides?

Like with most horizontal auger juicers, the biggest issue is the feed chute, measuring at just 1.5″ in diameter.

A lot of pre-cutting is needed especially with fruit but for leafy greens pre-cutting needed at all. But you’ll need to exert some force pushing it through the feed chute. It’ll be all worth it when you see how much this machine will yield.

Bottom line: The Samson GB9005 is a good alternative to the NC800 if the latter is too expensive. One issue would be finding these in stock. It has an adjustable end cap that allows you extract more juice than an Omega 8006. 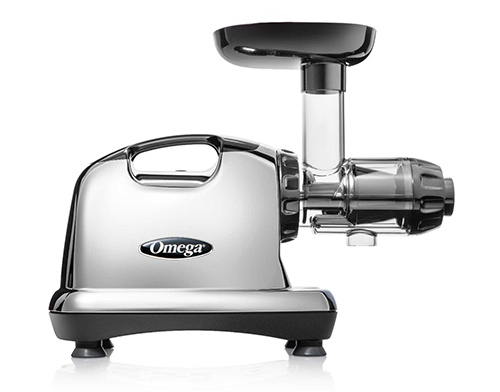 The Omega 8006 is an Amazon best seller because it is one of the more affordable horizontal auger juicers.

And it has long 15 year warranty.

It has an GE Ultem auger and strainer. For those unfamiliar with the term “Ultem”, it’s a grade of plastic that’s 8 times harder. So this juicer will be able to withstand daily usage.

If you want a green leafy juicer that does not need any learning curve then this juicer is a great choice because out of the box, you only need to assemble the parts and juice.

There are no settings to worry about. Just remember not to force feed or feed things too fast it or it’ll stop.

It has a reverse function that gets things unclogged.

The feed chute on this one is small at just 1.5″ in diameter. So you will need to pre-cut vegetables like carrots. But for green leafy vegetables even fibrous ones, there is no need to do so.

Bottom line: The Omega 8006 is a great option if you want something that doesn’t take up a whole lot of space, easy to clean and use. It will not extract as much juice as the Samson or Omega NC800 but this is cheaper than the NC800 and has less footprint so storing this will be a whole lot easier.

Diamond in the Rough: Tribest SS-9002

The SS-9002 from Tribest is another underrated juicer outperforms more popular brands like the Omega 8006.

It has an adjustable end cap that again allows you to control how much back pressure can be applied on the pulp which results in more juice.

Like all of the juicers featured here, it has a blank plate attachment that allows you to make all natural nut butters and sorbets minus the artificial sweeteners.

Despite all the great features this fell short because it had a short 5 year warranty and in does not have an Ultem auger or strainer.

Another thing would be price. Both this and the Omega 8006 are at the same price range. So the short warranty could be a deal breaker.

Not for everyday use

If you’re after yield and don’t make juice every day, this will be a great addition to your home.

Unfortunately this juicer is at the same price level as the Samson 9005. And since the latter has the longer warranty, that would be the better option.

Bottom line: The Tribest Solo Star II is one of the cheapest options available here at just a little over $200. And it will perform up to part with the Omega NC800 thanks to the adjustable end cap. It doesn’t come with the same warranty as the NC800 but it shouldn’t be a big issue with the price savings.

This is the only dual gear juicer of the 5 and the most expensive one of the bunch.

This will yield more than an Omega 8005 already a great juicer for leafy greens.

Main difference would be the later 2 uses an Ultem strainer and auger.

It has a pressure adjustment cap, which is similar to the adjustable end cap found in the Samson and Omega NC800 that basically squeezes out more juice.

There will be a learning curve here when using this machine in terms of the settings to use for each type of produce. So patience is a virtue.

Why did it fall this far?

Well, first off the biggest reason is the price.

This juicer will cost close to $500 which is very expensive for some. And it had a shorter warranty at just 12 years.

Also it has more parts to assemble. So you have to pay attention to how you put the two gears together which isn’t a big deal really. But for newbie juicers this maybe too much of a hassle.

But if you want an all-around machine that not only makes juice but other raw foods like salsa or homemade peanut butter then this is a great investment.

This juicer would be a great choice for folks who would want to incorporate more raw foods in their diet.

Bottom line: The Tribest GSE-5000 is the most expensive option of the bunch. However, it will produce pretty good yield. Having two metal gears means this machine will last longer. But it has more moving parts so learning curve will be steeper and it will take longer to clean.

There you have it, five of the best juicers that you can buy for leafy greens, all of them use a horizontal auger design so it won’t be as self-feeding as a vertical auger juicer.

All of these machines will extract more from leafy greens than any other type of juicer (except for a press juicer) because of its design.

If you have any form of arthritis then I’d suggest that you think something like a Omega VRT or if that’s too expensive for you, get the Fagor slow juicer which costs less than $120 – this would be a great option if you don’t want to spend too much.

Take note that vertical auger juicers won’t extract as much as their horizontal auger counterparts but will work much better with fruit so this is a pro and con you must weigh before buying.