They’ve since expanded their product line to include full-sized blenders, and today we’ll be looking at which Ninja blender is the best. 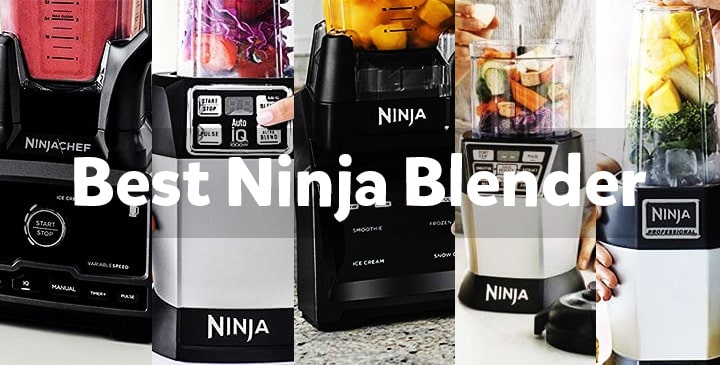 Saying that one particular variant is best would be irresponsible. So I’ll do this a bit differently than other comparison reviews.

To help you better understand, I’ll show you the different tiers in the Ninja line and which of the variants are best in that regard.

Related: Looking for a great blender deal? Check out this page to get the best blender deals in Amazon just in time for Christmas!

This will help you choose which would be ideal in what you’ll need.

So if you’re looking for just a smoothie making the machine for one, buying a large blender may not be ideal.

It’ll be great if you read the whole guide so that you can go through each option. But I know your time is valuable, so let’s begin.

How to choose the best Ninja blender that’ll suit your needs?

Choosing the right Ninja blender isn’t just a matter of buying the best overall product. You’ll have to base it on your needs.

Here are some of the questions you need to answer.

How much are you willing to spend?

What’s its primary use? Is it just for making smoothies or are you looking for something that’ll make other recipes like frozen desserts or nut butter?

Answering those questions will give you a better idea to which Ninja variant you’ll likely purchase.

What are you making?

Define what type of recipes you’ll be making most often. The choice for a smoothie maker will be different from something that can make guacamole.

Not only will you need something with a powerful motor, sturdy blades, and pusher.

How many are in the family?

Once you’ve defined what recipe you’ll often make, figure out how much you’re making. If you’ve got a family of 5, it will make better sense to get something with more capacity regardless of functionality.

On the other hand, single folks who only need something for one will be better off with a compact blender.

Prices vary significantly for the Ninja. Their top-of-the-line variant Ninja Chef 1500 will cost around $180. While the “entry level” Nutri Ninja Fit costs under $60.

If you look at these two variants closely, both are very different. One is a single serve blender that can only make smoothies while the other is a full sized blender capable of producing a myriad of recipes.

So budget alone should not dictate your options. You’ll have to look at the other questions first before using price as a deciding factor.

Folks who need something for just making smoothies will be better off with any of the Ninja compact blenders. It doesn’t have as much power as a Vitamix, but it is decent even with ice.

A quick overview of the Ninja product line

When Ninja busted into the scene, it seems like they were targeting the Nutribullet because they were manufacturing small blenders like the Nutri Ninja BL series.

But later on, they came up with other products that bring more versatility in the table.

After the original BL series came out, later Ninja variants added larger pitchers to the mix in addition to the single serve cups.

It extends the functionality of the blender to process food, not just make smoothies.

Several variants include the Nutri Ninja Nutri Bowl Duo and the Auto-IQ Complete. These variants use the same compact blender base with multiple attachments for different functions. Though, the Nutri Bowl Duo is a bit larger to accommodate the food processor attachment.

The professional series blenders or the BL610 series had a different type of pitcher.

With blades at the middle, this blender functions more like a food processor than a blender. This feature makes it great for making large batches of frozen desserts and smoothies.

The Mega Kitchen series marries two products into one – blender and food processor. All of which are interchangeable with one motor base.

These variants not only make smoothies but can also mix a batter.

It seems like Ninja is also aiming the Vitamix with their latest variant, the Ninja Chef 1500. It is a full sized blender that has the same power and versatility as a Vitamix.

The Ninja Chef 1500 is Ninja’s latest and in our opinion their best most versatile blender to date.

It represents a detour in terms of product design.

It is the first Ninja full sized blender that utilizes the traditional four-prong blade system used in other brands like the Vitamix.

Heck, it even has a tamper – something I’d never thought would appear in a Ninja.

The interface also is different with a sleeker design and another first – a rotary dial at the middle that controls speed and gives you access to the various preset controls.

Powering this blender is a 1,500-watt motor that allows this machine to make different types of recipes.

Ninja says that this blender is capable of making juices, smoothies, frozen desserts, soup, nut butter, salsa and much more.

It comes with a vented lid that allows this to handle hot liquid (not boiling).

The most significant selling point perhaps is the 10 Auto-IQ presets that eliminate guesswork and give you walk away convenience that’ll save you time.

Another reason why we put this on top is the price. This variant, despite being the latest isn’t the most expensive. It’ll cost less than $150 if you buy it on Amazon.

Bottom line: If you’re looking for something versatile that can replace a food processor inside your kitchen, then the Ninja Chef 1500 is a great option. It’s much cheaper than a Vitamix and yet will still provide nearly all the functionality that the latter brings. One downside though, would be warranty at just one year. But you can purchase extended warranties of up to 4 years from Amazon. 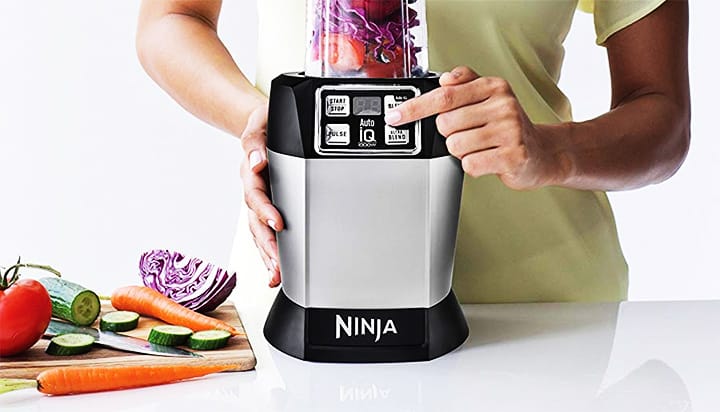 When the Nutribullet burst into the scene a few years ago, it wowed consumers with its combination of small size and power. However, the biggest issue with it is the wobbly blade that leaks, and it had no preset controls.

The Nutri Ninja solves these issues thanks to sturdier blade design and Auto-IQ presets that offers walk-away convenience.

Another advantage of the Nutri Ninja BL482 over the first or second generation Nutribullet is the motor. This variant comes with a powerful 1,000-watt motor. When it came out, none of the small blenders available had as much power.

The larger motor allows this blender to blend even green smoothies with easy. Also, it will be able to withstand the rigors of everyday blending with less risk of burning out the motor.

Bottom line: If you’re looking for strictly a smoothie maker with power and presets, the Nutri Ninja BL682 is a great option thanks to its 1,000-watt motor and two preset controls. 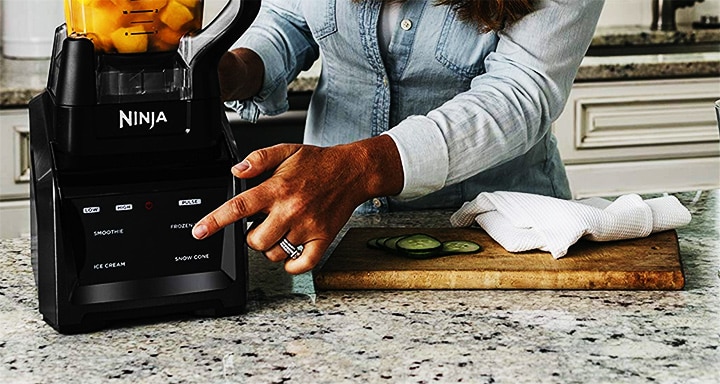 It is possible thanks to the intelligent motor base that’s able to detect what container you use without changing any settings.

Ninja calls this the Intelli-Sense technology. In essence, this blender is their most versatile blender.

However, I put the Ninja Chef 1500 ahead of this because it’s cheaper.

The only feature that the latter did not have was the spiralizer attachment.

If you’re not familiar with it, this attachment can turn vegetables like carrot or cucumber into noodles if that’s your thing. It is one great option to introduce your kids to the world of healthy eating.

All in all, it comes with four containers:

These containers all combine to make this one of the most versatile blenders available. You can not only make smoothies but also frozen dessert, soups, sauces, salsa dips, and even knead the dough.

If there is a downside, it would be the price. This blender will cost around $230, which is a lot for a blender that only comes with a one year warranty.

Bottom line: The only reason I’d buy this over the Ninja Chef 1500 would be the Auto-Spiralizer feature. If you don’t need this attachment, then stick with the former and save some cash. 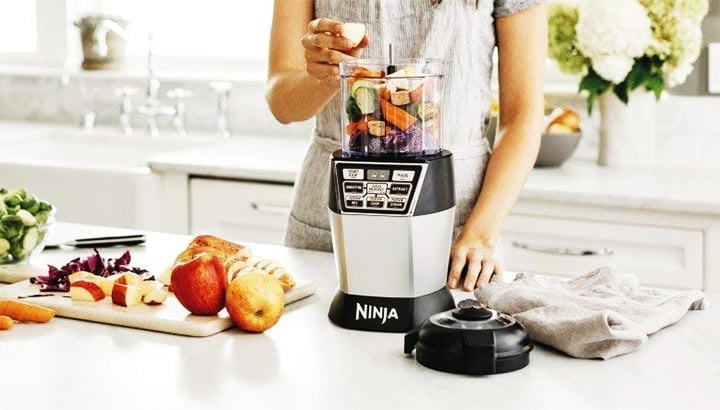 What I like about Ninja blenders is the innovation that they bring to the table. And the Nutri Bowl Duo is another example of that.

The first container is the standard 24 ounce Nutri Ninja cup for making smoothies.

The second container is Ninja’s very own Nutri Bowl that combines the functionality of a food processor and mixer.

With this container, you can do the following:

Chop ground pork, beef or chick, and veggies into a fresh homemade burger. Mix a batter and turn it into cookies or cakes with cleaner ingredients. Here’s the best part for those with children – turn frozen fruits into delicious frozen desserts that kids will love.

Powering this compact blender is a powerful 1,200-watt motor that is almost as powerful as a Vitamix. You know that this machine has enough power to mix the dough.

There are also 5 Auto-IQ presets to take away the guesswork. It also has a pulse function if you want to customize the texture if the recipe.

The best part about this product is the price. At just a little over $100, you’ll get a versatile blender that also has mixer and food processor functionality.

Bottom line: The Nutri Bowl Duo is an excellent option for folks looking for something that can make smoothies and other healthy dishes like guacamole, healthy burgers, frozen desserts, and much more. You don’t have to spend a lot of money as this will be slightly more expensive than the Nutri Ninja BL482. 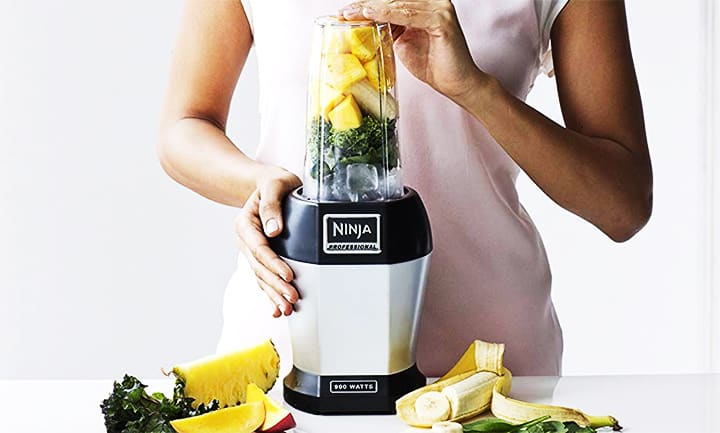 The Nutri Ninja Pro BL451 is Ninja’s most basic compact blender available. It does not have the fancy Auto-IQ preset found in more expensive variants. But this isn’t entirely bad because it’s the cheapest of the five options available here.

If making smoothies for one is a top priority for you, then this blender is the best option.

It’s compact and has enough power to make even green smoothies thanks to its 900-watt motor.

Out of the box, it comes with three containers have various capacities. The largest of which is a 24-ounce cup that is good enough to serve one or two glasses of smoothies.

The biggest downside of this blender would be functionality. Don’t expect it to make more than a cup of juice or smoothie.

It cannot make stuff like frozen desserts. Don’t expect it to crush ice without adding some liquid.

Bottom line: The Ninja Pro BL456 is the most basic of the bunch here. It only has one function – to make smoothies, that’s it. But the good news is it is also the cheapest at just under $80.

The Verdict: Which Ninja Blender is the Best?

Choosing the best Ninja blender will all boil down to needs. If you need something that can match a Vitamix’s versatility, then something like a Ninja Chef 1500 would be a great option. It’s got the 1,500 motor with a total of 10 presets.

A big reason we picked this over the other options here would be the price to performance ratio. All the features equate to a versatile machine capable of making recipes like hot soup, sauces, and much more.

Despite having the best feature set, it isn’t the most expensive. That title belongs to the Ninja Intelli-Sense with the Auto-Spiraling attachment that is capable of making homemade vegetarian spaghetti.

It is a specialized tool that you may or may not need.

There are two compact blender options the BL482 and BL456. Picking between the two will boil down to preference. If you want presets then opt for the more expensive BL482. And folks who want something more essential but cheaper will be better off with the BL456.