Not everybody has a big house.

Nor a nice kitchen that you see inside magazines.

So most people won’t be able to buy large 30 cubit feet refrigerators or a 20 inch tall Vitamix.

If you by any chance live in one of those homes then cheers.

You’re reason for buying a compact blender might be different.

Feel free to jump to the table below to see the recommended product list.

For most folks, who live in smaller homes, every square inch counts.

I myself live inside a small 40 square meter home. And having a large space eating blender is not an option.

Personal blenders are great for homes like mine that have limited space. These products aren’t as tall as full sized blenders. But still have enough power to make stuff like smoothies.

If you’re looking for something that will make more than smoothies then you’ll have to check our other lists.

But first a disclaimer. These blenders have limited size. And won’t be able to make more than two servings of smoothies or frozen desserts.

These blenders are not an option for families of three or more. If you want to make smoothies for more than three people consider these blenders instead.

For people who want don’t want to spend too much time washing a large pitcher, this is the piece of tool they can use to make smoothies or protein shakes in under a minute.

Before I continue here’s the list of the 5 best personal blenders in the market today, price range varies from the $390 Vitamix down to the $30 Magic Bullet.

How to choose a small blender?

The criteria in choosing a small blender are pretty much the same as a full sized blender. The most important thing to set before anything else is the budget. So that you can narrow your options down quickly.

Second would be the size of the pitcher so that you know exactly how much you can make. Remember that all of these blenders can make very small sized servings that will be enough for two people at most.

Lastly, look at the warranty.

This could be a clincher that will help you pick one over another if the price difference is not a lot. 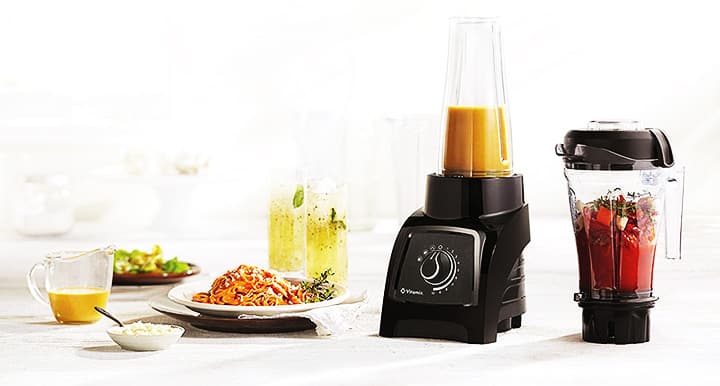 When you ask people what they thing about the Vitamix, they would probably tell you that it is a big bulky blender than can handle just about anything you throw at it.

But not a lot of people know that Vitamix also manufacturers a compact blender.

When you look at the features, price, customer reviews and warranty, there is little doubt that the S50 is a winner.

It may not be the most powerful, having just a 790 watt motor. But it has lots of torque which means it will go through smoothies in under 30 seconds, even if it contains ice.

And it has one feature that none of the other compact blenders have – it has a plunger.

This piece of plastic helps push down ingredients toward the vicinity of the blade.

The plunger isn’t needed for smoothies but it comes in handy for sorbets. However for making stuff like sorbet it is an essential tool to have.

If you’re looking for a green smoothie maker, this is a no-brainer choice.

What separates this from other compact blenders is the blade design.

If you look closely the blade design in the S50 is similar to that of the 5200. 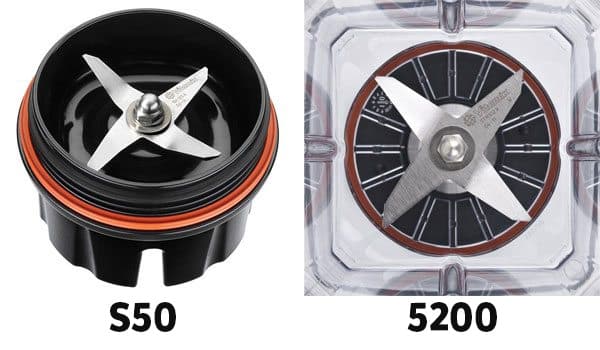 Here are some tips on making a green smoothie with the s30.

You don’t need a lot of ice just a few cubes will do but make no mistake this blender can crush ice it you need it.

Another thing to remember when making green smoothies is to put the greens at the bottom so the blades chop it up first. Leaves can be notoriously hard to blend using weak blenders.

The control is pretty basic – basically a dial. It does not have any preset controls. Vitamix does have the S55 that has that feature if you want that in your blender that it will cost you close to $20 more.

Bottom line: If money is not an issue and you want a consistently smooth healthy green smoothie done in just under 30 seconds, this is the best that you can buy. 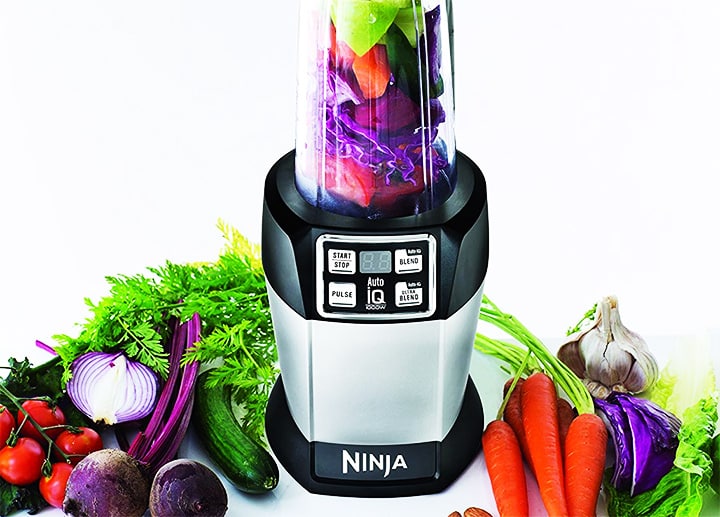 The Nutri Ninja is one of the more popular compact blenders in the market right now.

It’s so popular that Shaq gave it as a gift to Charles Barkley in a recent NBA on TNT Christmas episode (watch it, it’s hilarious!).

Hype aside, this machine is one of the best to buy if you want to make smoothies on the go.

Unlike the Vitamix though, this blender cannot make homemade nut butter but its a few hundred dollars cheaper! So if that isn’t a deal breaker this is a good option.

The different between the Auto IQ and basic Nutri Ninja would be the preset controls. It allows users for hands-free operation when making smoothies.

Here’s a demo of it in action…

Depending on what ingredients you put it, the blend will yield a slightly thicker smoothie than the ultra-blend. If you’re more comfortable in using just the pulse, it also comes with that option as well.

It does come with a shorter warranty than the Vitamix (1 year vs 5 years) but it is $300 cheaper.

Inside the package you’ll get 3 plastic containers – a 12, 18 and 24 ounce containers, all with seal and sip lids.

This is great for people looking to save time because you don’t need to wash anything, just blend, cover the container with the lid and you can bring your smoothie to work or to the gym.

Bottom line: This blender is great for people looking for a high quality compact blender with actual blending power to go through frozen fruit as well as some leafy greens. It cannot make more than single serve drinks though. 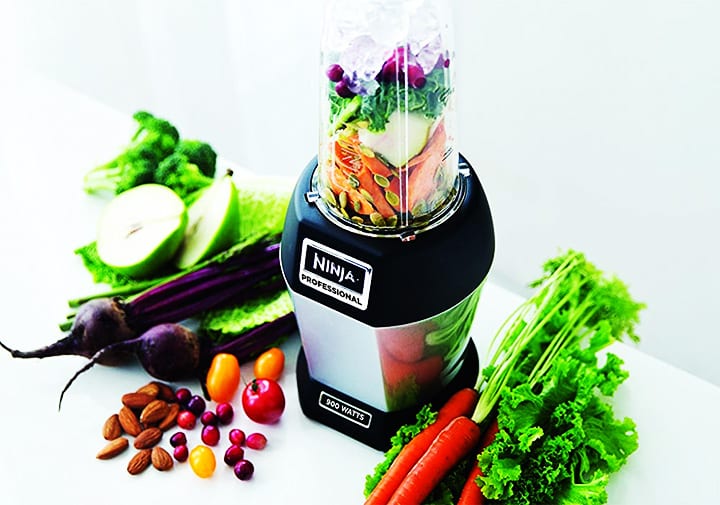 If you don’t need the preset functionality of the Auto iQ then your next best option would be the Nutri Ninja Pro.

This machine has a similar design to the previous to the “smarter” Auto iQ.

But has a smaller 900 watt motor but based on reviews, the 100 watt difference seems negligible if you’re just making smoothies or protein shakes.

Like the iQ version, this comes with two containers (18 and 24 ounces) with seal and sip lids (the iQ has 3).

Performance wise both machines will roughly produce the same quality smoothie because they have the same blade design – only difference is the motor.

Here’s a demo from Nutri Ninja on how to make a green juice with some spinach, broccoli, ginger, kiwi and avocado.

Don’t forget to always add a little bit of water to help get things going.

Bottom line: If you really don’t need the preset options, I’d go with this version of the Nutri Ninja and save $20 or so. 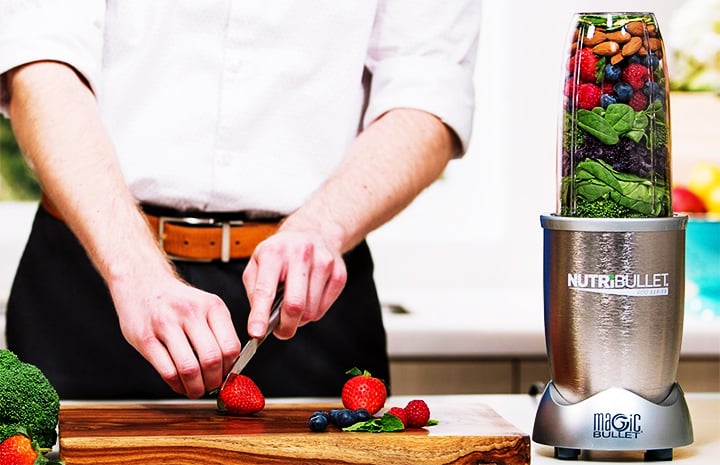 The Pro 900 from Magic Bullet is a direct competitor of the Nutri Ninja Pro. Both have 900 watt motor bases and have plastic containers with seal and sip lids.

The biggest difference I see between these two products is the blade design. And this is the biggest reason why I put the Magic Bullet below the Nutri Ninja. 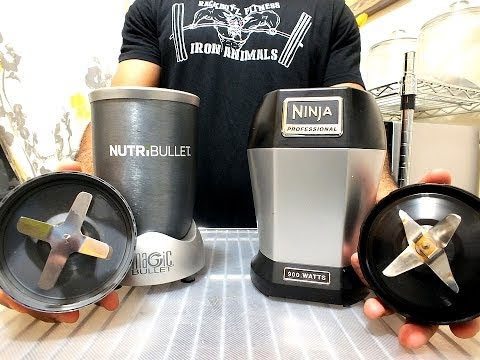 Even with the eye test, the Ninja blades look more sturdy compared to the Magic Bullet. A stiffer blade will yield a more consistent blend. This means less risk of having chunks of fruit or vegetable floating around in the smoothie.

You don’t want that. What you want in a smoothie is smoothness, not chunks.

Another downside to the blade design of the Magic Bullet would be the risk of leaking. This is a long standing issue with both the original Nutribullet and Pro versions.

Nutribullet is now selling upgraded blades through Amazon and consumers said it was less noisy.

To minimize risk of leaking, avoid overfilling the cups.

With the Nutri Ninja, it seems more solidly built with less risk for leakage in the long run and reviews have confirmed this.

Here’s a blending comparison between the two…

Despite the Nutribullet having the inferior blade design the different between these two isn’t really much when it comes to blending fruit.

The different in blade design will be more evident when blending leafy greens. These are much harder to chop but if you don’t put a lot in it shouldn’t be an issue.

Bottom line: The Nutribullet Pro is a good alternative to the Ninja that’s compact and simple to use. My biggest concern would be the leaking issue and inferior blade design. 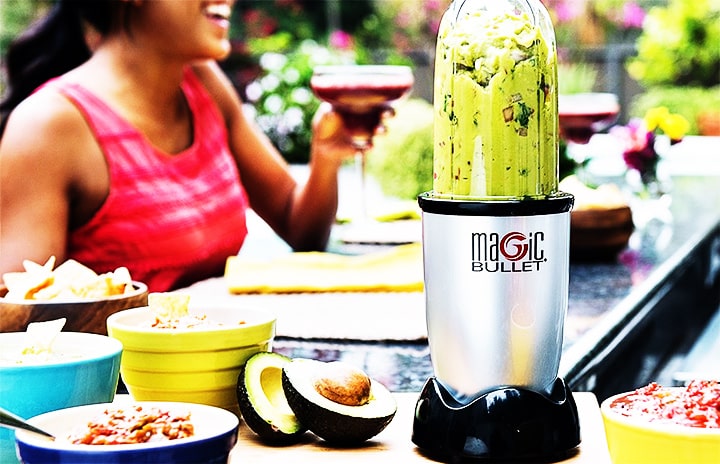 If the Vitamix or Nutribullet is too expensive for you fear not, the next option costs more than 10x less than the S30.

What makes the Magic Bullet a good option

The Magic Bullet is the cheapest option of the 5 and also has the smallest footprint.

Even with its small frame this machine still packs some punch. And while Magic Bullet did not specify how many watts the motor has, they claim that it can make a smoothie in 10 seconds or less.

The biggest caveat would be the very small container that can only make 12 ounces at a time.

This is purely a smoothie maker because you cannot run the motor more than a minute (or risk burning it out).

But for people looking for a no-frills and space saving product that is lightweight and compact this blender is hard to beat.

It will not wow you with features or power but it will do its job as long as you know its limits.

Bottom line: The compact size of the Magic Bullet makes it a great travel blender for folks looking to make their own smoothies inside their hotel room. If you don’t mind the short warrant, small cups or weak motor this is a good budget option that costs less than $40.

There you have it, 5 of the best personal blenders that you can use in your small home or take with you on the road.

To summarize, the Vitamix S30 is the most versatile of the bunch capable of making smoothies, soups, sauces and more. The other four options are pretty much smoothie makers that can make smoothies quickly.

If you really need a small blender the Magic Bullet Mini is a great option. But remember not to run the motor for more than a minute or you’ll risk burning it out. Also make sure to add some water or any form of liquid to all your smoothie recipes.