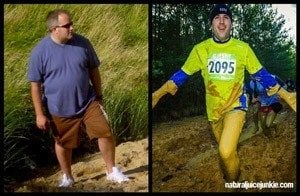 Neil Martin lost an amazing 75 plus pounds ever since he started juicing in 2009.

Not only was the weight loss amazing, he no longer suffered from asthma attacks and IBS.

From barely able to run, Neil was able to complete several half marathons and two full marathons!

His story was so inspiring for that I included him in the list of 43 bloggers who’ll inspire you to juice.

Garrick Dee: First off, I’d like to thank you for accepting this interview. What was your diet like before you started juicing?

Neil Martin: My journey to regain my health started in September 2009, when I initially took steps to clean up my diet. This ultimately led me to start juicing in early 2010.

Prior to my dietary changes I ate meat at every meal and rarely consumed plant based foods as anything more than a garnish.

Garrick Dee: What was the tipping point? When did you say enough is enough, I need to get my health back?

To be honest I feared I was at risk of a heart attack and knew something had to change.

Neil Martin: There were a few events that lead to me making changes in my life. In 2008 at a children’s birthday party I became out of breath after running around with the children for just a few minutes. My chest was pounding and I needed to sit down. To be honest I feared I was at risk of a heart attack and knew something had to change.

It took nearly a year before I felt the need to address my health. The final straw was when I tore a hole in a suit I was wearing for work and needed to purchase a replacement. The new suit was the largest item of clothing I have ever purchased. I was embarrassed and ashamed by my size.

Garrick Dee: Where did you learn about juicing and did you have any reservations about it?

Neil Martin: I first discovered the idea of juicing vegetables when reading a book on nutrition in early 2010. It was a ‘light bulb’ moment and I purchased a juicer the following day.

When I subsequently read about the idea of doing a juice only detox / cleanse I was a little concerned as everyone I discussed it with thought I was crazy, but I decided to give it a go.

By day 3 or 4 I felt fantastic and that is when I became a natural juice junkie.

Garrick Dee: What were your goals?

Neil Martin: Initially I was focused on weight loss, but this quickly changed to focus on improving my health as various illnesses such as asthma and IBS subsided. I now firmly believe that if we focus on health our bodies find their natural weight.

Garrick Dee: What was the biggest change you noticed?

Neil Martin: The energy!! By day 3 or 4 of my first ever period on juice only I was bouncing like Tigger. I felt so alive. That energy has stayed with me as I have gone from being an obese couch potato to a healthy marathoner. I am currently training for my first ultra-marathon (the 100 mile run). 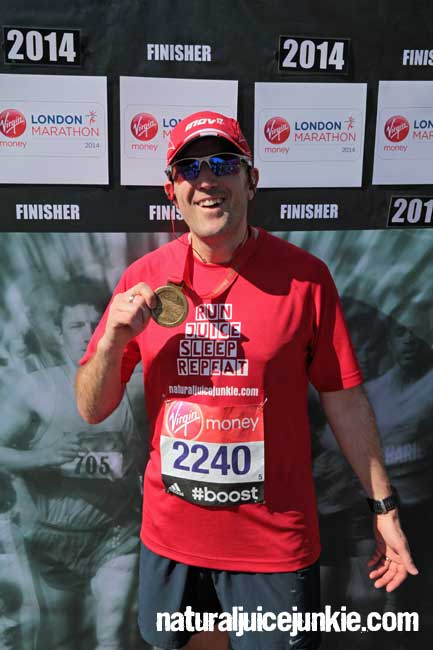 Garrick Dee: When you started, did you do a juice fast immediately or incorporated it in your diet?

Neil Martin: Initially I was juicing alongside my normal meals.

From memory I think I had been juicing for around 3 months before I completed my first juice fast. The longest period I have ever done on juice only is around 7 or 8 days. Juicing can be life changing even if you never do a juice fast.

Garrick Dee: What was the biggest mistake you made (if any)?

Neil Martin: I guess my biggest mistake was trying to be ‘normal’. Once I’d lost some weight I tried to go back to an average lifestyle and diet. These days average (or normal) means you are likely to be overweight or obese and then ultimately die from a disease that could potentially be avoided through simple lifestyle changes. By trying to be normal I regained some of the weight I had lost. I stopped feeling well and decided I no longer wanted to be ‘normal’.

Garrick Dee: What was the toughest part of a juice fast?

When I did my first juice fast I did it alone while my family continued to eat solid food. This left me feeling lonely and isolated from my family. Luckily my wife was so impressed with my results that she has joined me on all subsequent juice fasts. Typically we have a period of 5-7 days on juice only once every 3 months.

Garrick Dee: How did you feel afterwards (after you did the juice fast)?

Neil Martin: My lasting memory is a craving for broccoli!

Garrick Dee: What would your advice for someone like me who hasn’t done any juice fast to prepare? What should be our mind set?

Neil Martin: My advice would be to educate yourself on the impact food has on your body. Watch documentaries like Hungry for Change, Forks Over Knives and Food Inc and / or read books about diet and nutrition.

When you learn about the addictive nature of processed foods and impact they could have on your health you will quickly go from the diet mentality of “I can’t have” to having a view of “I can have, but I don’t want”.

Garrick Dee: Losing 70 pounds is a great achievement. How long did it take for you to lose that much weight?

Neil Martin: In total I have lost over 75 pounds. Most of this was within 12 months.

Garrick Dee: What do you think was the biggest factor in your weight loss? Was it diet, exercise or juicing?

Neil Martin: Most of my weight loss came before I started exercising. I believe that you can’t outrun your fork and hence diet and nutrition is key to our health.

Exercise is important but should be viewed as a celebration of what our bodies are capable of, not a punishment for a bad diet.

Garrick Dee: Did you smoke, drink alcohol or coffee before you started juicing? If so was it though giving it up?

Neil Martin: I gave up smoking in 1998 when my father died of cancer. It was one of the last things my dad asked me to do.

As for alcohol, the UK has a big drinking culture and I used to be someone who ‘liked a drink’. I was also a big coffee drinker. I occasionally still drink alcohol and coffee, but it is infrequent and in much lower volumes than I used to consume.

Garrick Dee: Do you still take medication for your asthma and IBS?

Neil Martin: No, I no longer take any medications.

Garrick Dee: What does your diet consist of now?

Neil Martin: I typically start the day with a Ginger Slammer (http://naturaljuicejunkie.com/2013/09/ginger-slammer/) and then some kind of juice or smoothie. The ingredients I use vary significantly from day to day as I believe it is important to include a wide variety of produce in our diets.

Lunch will typically either be another juice or smoothie. Sometimes it may be a salad or soup or even some kind of sandwich or wrap if I’m traveling. I try to keep most of my food plant based and as natural as possible.

I am a big fan of eating 4 or 5 times a day rather than following the traditional Western approach of 3 meals. This means I typically have a mid-afternoon snack which is often another juice, a piece of fruit or some nuts and seeds.

In the evening I eat pretty much anything I feel like, although these days I tend to find I crave healthy foods.

Garrick Dee: Did you at some point felt the urge to “cheat” on your diet and binge on something greasy, let’s say steak?

Neil Martin: I’ve never viewed juicing as a diet. I only started to lose weight and get my health back when I stopped dieting and instead decided to focus on sustainable lifestyle changes.

Garrick Dee: What type of juicer do you use? What features made you decide to buy it?

Neil Martin: I’ve recently become a product ambassador for the Optimum juicers and blenders. The Optimum 400 is a vertical cold press juicer that delivers a high yield, high quality juice and compared to other  juicers I have used I believe it gives excellent value for money.

For more information take a look at http://naturaljuicejunkie.com/2014/04/juicer-review-optimum-400-cold-press-juicer/

Garrick Dee: If you could pick only 5 ingredients to put in a juicer, what would it be?

Neil Martin: One of my favourite juices is made from cucumber, celery, spinach, apple and lime.

On a side note

Neil recently contributed to a BBC Radio Gloucestershire feature on juicing as part of the daily breakfast show. This was following news reports that eating seven or more portions of fruit and vegetables a day is healthier than the minimum five currently recommended.