Gone are the days when Ninja only manufactures small blenders.

Let me introduce the Ninja Chef 1500. This 1,500-watt blender is Ninja’s most powerful and versatile product to date. 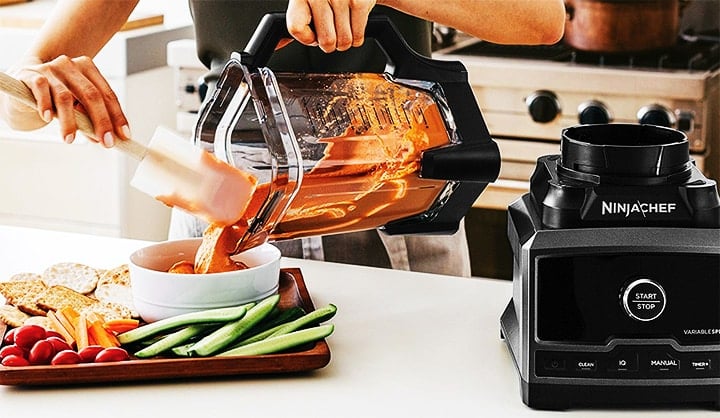 Not only is it almost as powerful as a Vitamix, but it’s also equally as versatile with ten preset controls that do every kitchen task imaginable from making smoothies to mixing the dough.

Related: Looking for a great blender deal? Check out this page to get the best blender deals in Amazon just in time for Christmas!

And like the Vitamix, this blender also comes with its tamper for hard to make recipes like hummus and nut butter.

One unique feature that this blender has which other Ninja blenders don’t is a rotary dial at the middle.

This dial has two functions. First would be toggling the different preset controls. The second will be controlling the speed of the blender if you decide to go manual.

It’s also one of their first blenders that have a similar blade design as a Vitamix.

What to expect from the Ninja Chef 1500?

The Ninja Chef 1500 is a significant change in direction from Ninja in terms of product design. Everything from the blade design to the interface is different. And we’ll have a close look at all those features in this review.

Part of the overhaul would be the interface. Gone is the cluster of buttons that resemble an old Nokia phone. 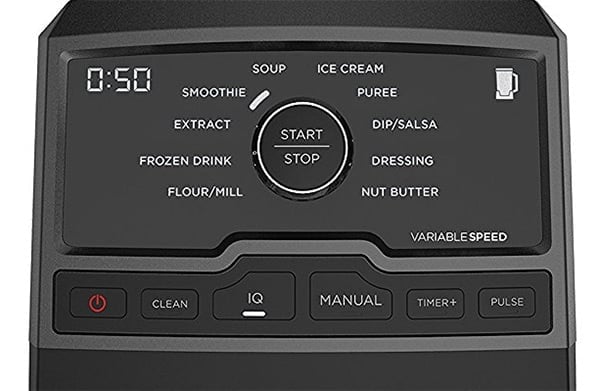 In its place is a more sleek design that has a rotary dial in the middle and an LED background for the Auto-IQ presets.

At the bottom of the interface are six buttons that toggle between different modes:

The 10 Auto-IQ options include the following:

All these features make this blender one of the most versatile options available right now.

Press the manual button, and you have the option to control the speed setting manually if such a need arises for particular recipes.

Speed is adjustable via a knob at the middle of the interface. This same knob also toggles between the different Auto-IQ settings.

Whereas old Ninja blenders use blades that come from a food processor, this variant uses traditional blender blades that sit at the bottom. 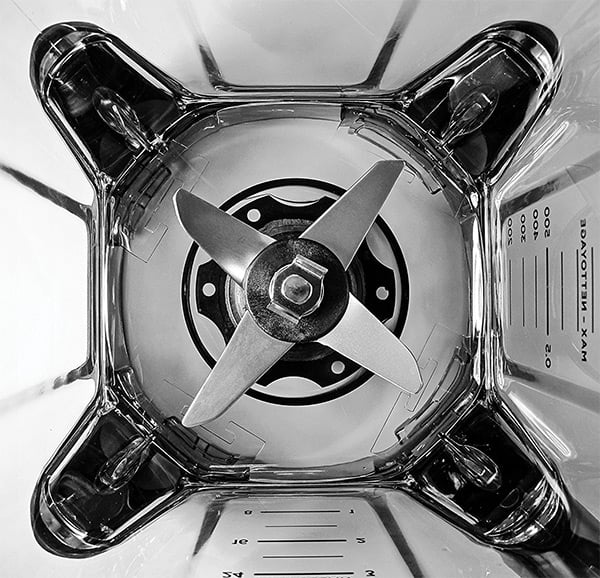 It will produce more consistent results and better performance than the previous generation Ninja blenders.

Under the hood, is a 1,500 watt motor with enough torque to make recipes like frozen dessert and nut butter.

If you have a large family, this blender will be a great tool to have inside the kitchen because of the large 72-ounce container. It uses BPA-free plastic, and you can make hot soup with it thanks to the vented lid.

This container is dishwasher safe which gives you more options on how to clean it. Remember to put it on the top rack.

The Ninja Chef series has this feature they call the “Smart Vessel Recognition” that automatically recognizes if you put the 72-ounce pitcher or single-serve cup.

It eliminates any guesswork since the motor automatically adjusts the speed setting to suit a particular container.

Cleaning the large 72-ounce pitcher will not be an issue thanks to Ninja’s built-in cleaning preset.

After blending, fill up the container a quarter of the way with water then add a few drops of dishwashing liquid.

Press the “clean” button right beside the power switch and let the blender do the work for you.

Just make sure to rinse it through roughly to remove any soapy residue.

Another improvement that Ninja brought to the table would be the addition of a tamper.

This tool will help the blender in pushing down ingredients towards the blade.

It is an absolute necessity if you’re making recipes with very little liquid such as hummus, nut butter, and ice cream.

Recipes that this blender can make?

One of the strong suites of this blender is its versatility. Combine the 10 Auto-IQ presets, variable speed setting and pulse settings; this blender can pretty much make anything you can think of.

Watch this video to see how this blender makes hummus (skip to the 2:53 mark).

Hummus is one of the hardest recipes to make. And if you use a cheap blender, it can be a pain to make.

What do consumers say?

There are two things that consumers like about this blender – price, and performance. If you compare it to the Vitamix Ascent that costs upwards of $400, this machine only costs a fraction. And the performance does not reflect on that price difference.

Consumers were able to make a variety of recipes with this ranging from smoothies to frozen dessert. You can even make homemade flour with it if you like making your own.

Some even say that this blender is better than a Vitamix and a great bridal gift.

One downside with the powerful motor would be noise. Several reviews say that this blender is very loud.

There are also complaints about quality control issues, particularly with the plastics. Some consumers even sent in pictures, one of which looked like a broken plastic gear.

Take note that this blender only comes with a 1-year warranty. One consumer was upset because he thought it came with a 7-year warranty and found out otherwise when he saw the warranty card.

You can buy the Ninja Chef 1500 from Amazon for less than $150, and it’ll be eligible for their 2-day free shipping if you join Prime.

Amazon also sells extended warranties of up to 4 years if you want that extra peace of mind.

Another option would be buying directly from Shark’s website, but it’ll be more expensive.

The Ninja Chef 1500 is another excellent alternative to the Vitamix blender if you don’t want to spend $$$ on such. It’s got comparable versatility and power thanks to the ten presets, new blades and 1,500-watt motor.

You can virtually make any recipe inside the kitchen except for kneading the dough. At less than $180, this is a pretty good deal for a full-sized blender.

This blender only has a 1-year warranty, but you can purchase an extended warranty from Amazon or Shark-Ninja if you want a longer coverage.

There are some issues with quality, but most consumers were happy with how this blender performs which is a good sign.