With the J8006, Omega provides you with a machine that extracts more juice from green leafy vegetables such as spinach, kale, and arugula.

This means you’ll get more juice from leafy greens like kale or wheatgrass. 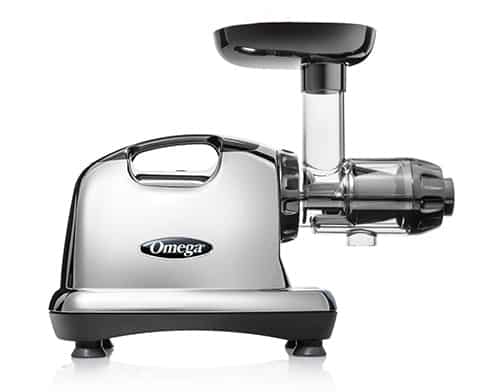 I don’t juice straight leafy greens, but if you do, the 8006 is the juicer you want.

Not only will it extract more, but it’ll also produce much less foam.

And less foam = less air = longer storage times, up to 72 hours in an air-tight mason jar.

How does it yield more juice?

It uses an auger (think of a meat grinder, the same principle works here) that squeezes produce against a mesh screen and it does this in two stages.

On the initial squeeze, juice drips through a mesh screen below the auger.

The pulp then goes through a tapered cylindrical screen that squeezes tighter as it goes along.

This system is more efficient than any vertical single stage auger juicers and will yield more with the same amount of produce.

This will work best for…

…Green leafy vegetables such as kale and wheatgrass, though you’ll be able to use this to juice fruit as well.

Don’t use this for sugar cane because the auger and mesh screen is not hard enough to crush sugar cane.

For fruit such as apple and vegetables like cucumber, you’ll need to pre-cut so that it’ll fit through a small round feed chute measuring 1 to 1-1/2 inches in diameter.

The small opening has a downside which is you’ll exert more effort to push ingredients down the chute using a pusher which isn’t an issue unless you have arthritis or a similar condition.

The high amount of juice extracted makes this extra effort worth it, especially if you’re into drinking green juice exclusively which is one of the most nutrient dense foods out there.

According to John Kohler, nutrient dense means that it has the most nutrients with the least amount of calories.

Aside from extracting nutrient-rich juice you can use this for:

It not related to juicing but I just wanted to let you know these features just in case you have a need.

How long can you store the juice?

Omega claims you can store juice extracted from the J8006 for up to 72 hours, provided that you store it in an airtight mason jar, refrigerated.

It can do this because of the design. Combine the slow spinning auger and tapered mesh screen, and you’ll get a machine that extracts a lot of juice without oxidation because minimal air gets into the juice. This means a better tasting juice and you can store longer.

Now, I would not recommend waiting that long before drinking, if you could drink it immediately fresh right out of the juicer that would be great because you’ll be digesting a lot more nutrients than drinking it a few days after.

If you need to store juice to bring to your workplace then, by all means, do so, all I’m saying is for best results, drink it fresh.

Do you need to chop?

For green leafy vegetables, as long as it fits the 1-1/2 inch diameter feed chute, there’s no need to pre-cut, just jam it in there and push it with the plunger and the auger do the work.

Don’t put too much at once though because it will clog. It has a reverse feature that allows you to unclog it just in case.

For vegetables like cabbage, zucchini or cucumber, you’ll need to pre-cut so that it fits.

For fruits, you’ll also need to pre-cut so that it fits in the opening.

Compared to a centrifugal juicer this will extract way more juice from leafy vegetables and fruit though it won’t be as fast.

I don’t have exact figures because every fruit or vegetable will yield different amounts.

If you check my recipes section, I’ve included how much each recipe would yield just to give you a reference.

You can even take the pulp and put it back in again to extract even more juice, some consumers have done so as much as three times.

How much? Just watch this video and see how it compares to the Omega VRT juicing wheatgrass.

Is it hard to clean-up?

Nope, because it has a thin auger and a narrow strainer, clean-up should not take more than 5 to 10 minutes (that is if you’re thorough like I am).

Even Reddit juicers say it cleans in a snap.

It also comes with a brush that’ll help you clean pulp off the mesh strainer.

These types of juicers work similarly like wheatgrass juicers and meat grinders.

The J8006 comes with a 15-year warranty from Omega on the motor and all the parts.

According to Omega, even if you purchase it from Amazon, you’ll still get the same 15-year warranty.

Don’t forget to register your juicer once you get it.

Unfortunately no, the main housing uses a poly-carbonate housing while the newer 8007 / 8008 comes with the Eastman Tritan polymer which is BPA-free.

Compared to a centrifugal juicer, masticating juicers like this one is relatively quiet. I don’t know exactly how many decibels it makes, but you can still have a conversation without yelling while juicing your produce.

It uses a gear reduction motor which is equivalent to 2HP. When you consider that the auger only spins at 80rpm, that’s a lot of torque for a machine at this size. It means more crushing power that will yield more juice from every pound of produce.

It is available in 2 colors, a chrome/black combo, and white. Omega 8004 and 8006 are similar machines; the only difference is color.

What do consumers say?

Consumers left an overwhelmingly positive rating for the Omega J8006.

The biggest downside would be the small feed chute that requires chopping which is you’ll soon forget when you see the amount of juice it extracts. And the juice that comes out tastes way better than juice from a centrifugal juicer.

There is minimal air that goes into the juice because the auger only rotates at 80 rpm – this means less oxidation.

The juice that comes out has less foam as consumers noted in their reviews.

You may read complaints about plastic shavings caused by the auger scraping the stainless steel mesh filter in some reviews, but this doesn’t occur in all Omega 8006 juicers that come out of the factory. These are probably manufacturing defects where burrs scrap the plastic auger.

Some consumers have resorted to using a Dremel grinder to smoothen out these burrs but doing so WILL VOID THE WARRANTY so if you see signs of plastic scrapings, let contact Omega and let them know about this.

John is saying that if there are plastic shavings, it will be minimal and should either go out of the pulp ejector or into the juice. Just in case it makes its way to our gut, it eventually comes out.

Unlike bottled water or canned meat where exposure is much longer, plastic exposure in juicers is minimal.

You can buy this from Amazon for less than $300, and it’ll be eligible for their free 2-day shipping if you join Prime.

Extended warranties are also available of up to 4 years if you want that extra peace of mind.

Take note that this juicer already come with a 15-year warranty from Omega so you may not need to purchase any more extended warranties.

This juicer will work great if you plan to juice mostly green leafy vegetables like wheatgrass, parsley, kale or spinach because it is efficient enough to squeeze the juice out of them without the need for a harder ingredient like a carrot to push out pulp.

But with the small feed chute, you’d have to chop stuff like cucumber and apple.

Another downside to this product would be the need to use the food pusher because it is not self-feeding unlike a horizontal auger juicer like an Omega VRT or a Hurom HU-100. So if you have a debilitating condition like arthritis go with the latter.

Cleaning will not take more than 10 minutes because you’ll only need to clean around four parts and it comes with a brush to clean the mesh screen. 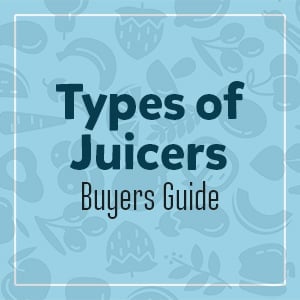