When it comes to blenders, Vitamix has been a market leader for several years right now. Their products are so good that competitors like Blendtec make ads that discredit them.

But the reviews are almost unanimous — lots of consumers like the versatility that this blender brings to the table. 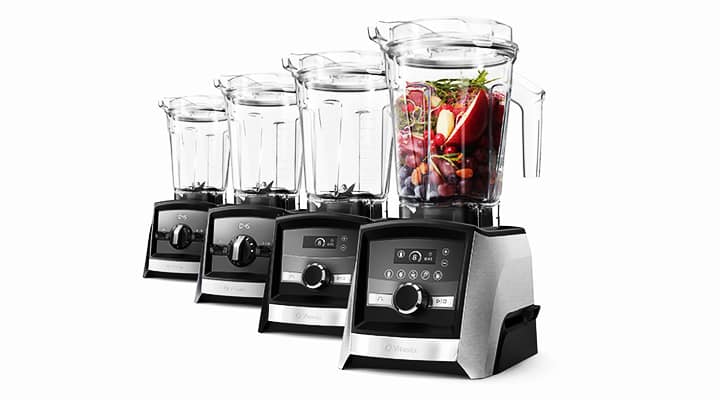 Vitamix still not satisfied with the success of their second generation blenders, set out to create a new line called the Ascent series.

This one combines the best of both worlds – the minimalist approach of having very few options that lots of consumers loved when the first Vitamix came out and modernity of digital controls that found in other brands such as Blendtec.

They’ve successfully combined these two components to create something that’s simple to use and sophisticated at the same time.

Before anything else, let’s look at the specs of these four.

All Ascent variant blenders have the same low profile 64-ounce pitcher that slices a few inches off from the first gen pitcher. It means it has a larger pitcher with a bigger blade.

What I like about the design of the pitcher is its ability to blend different types of recipes.

Not only will this make smoothies, but you can also mix a batter, blend soup and even make nut butter!

When you turn this blender on, ingredients are forced downward toward the four-inch blade that will pulverize everything.

To help push ingredients down, it also comes with a tamper that you can use on recipes like nut butter.

This feature, in my opinion, is what separates a Vitamix from other comparably priced blenders like Blendtec. It works so well that brands like Cleanblend have copied their concept.

Lastly, Ascent blenders are compatible with Vitamix’s “SELF Detect” containers that include the Blending Bowl Starter Kit and Blending Cup Starter Kit.

These containers are great but expensive since it automatically adjusts blend times.

The second generation motor has slightly more power (12 amps vs. 11.5 amps) versus the first gen 2hp motor. Vitamix says that it has a little better cooling, but the difference isn’t that dramatic.

Here’s the best part of the Ascent. All of their blenders come with an industry-leading ten-year warranty.

Yes, you heard that right, that’s ten years of worry-free ownership because Vitamix stands by their products.

If that isn’t enough, you can purchase an additional 3 or 4-year warranty if you buy this from Amazon.

Here’s an overview of how the interface of each variant will look. It will give you an idea of how each will differ. 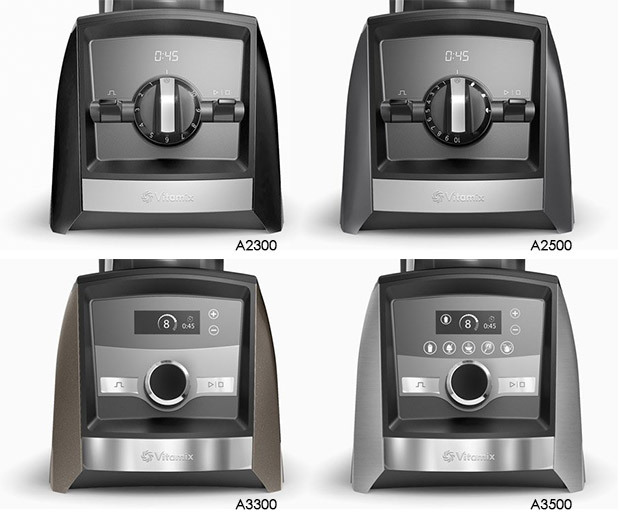 The A2300 is the most basic Ascent variant and is cheaper than the older 7500. But don’t let the entry-level price (in Vitamix level) fool you because it’s a better deal in my opinion versus the 7500.

This variant is the closest in terms of looks to the second generation 5300 as it has the same layout. The pulse button is at the left, rotary dial in the middle and the on/off switch on the right.

But the design looks classic with a touch of digital to it thanks to the digital timer on top of the rotary dial.

This timer helps a great deal in accurately timing blend cycles in certain types of recipes. You can ditch the timer right now.

Next up is the A2500. It has a similar layout to the entry-level A2300 with the pulse on the left and on/off switch on the right with the digital timer on top.

On the other half of the rotary dial is access to 3 preset controls.

These controls will give you the ability to make hot soup, smoothies, and frozen dessert without any guesswork involved.

It means that you turn the dial towards the setting and the blender does the rest.

It will give you a level of consistency that will make this a good option if you have a restaurant business or something similar.

The A3300 is an A2300 with a programmable timer and a sleeker interface.

It lacks the programmable options found in the A2500. But it makes up for that with a programmable timer that more or less does the same thing.

This variant has the same layout to the A2300 but minus the toggle switch.

In its place is a touch screen panel that not only makes it look prettier but easier to clean. The whole part is waterproof so cleaning any messes would just entail wiping down with a clean towel.

The top of the line A3500 has all the bells and whistles that you’d want in a blender.

It’s got a powerful motor, easy to use interface, preset controls, programmable timer and an easy to clean touch screen panel.

The design is similar to the A3300, but it has five pre-programmed controls for making smoothies, frozen dessert, hot soup, sauces and even one for cleaning.

When you combine it with the programmable timer, this blender gives you loads of options found in just a few blenders in the market.

Despite all the features Vitamix put into it, they’ve managed also to keep the controls to a minimum. It is the minimalism that I like in the Vitamix.

Like the A3300, it only takes a damp clean towel to clean it.

Where can I buy these blenders?

You can purchase these blenders direct from the Vitamix website. But if you want to get the best deal, I suggest you try looking at Amazon.

For instance, the Ascent A3500 will cost close to $650 in Vitamix.com, but if you get it from Amazon, you’ll save roughly $50. And you can get free 2-day shipping if you sign up with Amazon Prime.

Another reason why I like buying from Amazon is the availability of an extended warranty if you purchase a 4-year extension that would up the warranty to 14 years!

Even if this blender lasts for ten years, it will be worth it.

There you go I hope this guide has helped you know the differences between the four Ascent variants. All these blenders have the same motor and pitcher. The difference would be the interface.

If you don’t mind not having any preset controls or a programmable timer, then save yourself a few hundred bucks and go with the entry level A2300.

If you want something basic, then go with the entry-level A2300.

But the best value for money in my book would be the A2500.

In addition to the pulse and variable speed dial, you also get three preset controls for making smoothies, soup, and frozen dessert. The first two functions are the most useful as most consumers would use this the most.

If you find this useful, please share this article with your friends through social media.